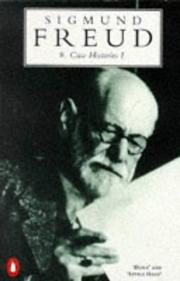 'Case Histories' is the first in a series of stories by Kate Atkinson about Jackson Brodie - an ex-army, ex-police force private investigator living near Cambridge.4/5(K). The 'case histories' in this book are intriguing, locked together in ways that are not too unlikely, and overall the book is (very) darkly comic. I love Kate Atkinson's storytelling, her writing, the way she plays with time and twists the genre. Not surprisingly, I'm now going to reread the next one.4/4().   CASE HISTORIES is so exuberant, so empathetic, that it makes most murder-mystery page-turners feel as lifeless as the corpses they're strewn with. — New York Times Book Review. Jacqueline Carey. One of the most enjoyable books in a long time. — Kansas City Star. Leslie McGill. Grabs hold of the reader and doesn't let go/5(). Case Histories 1 book. Read reviews from world’s largest community for readers. Dora Little Hans/5.

Based on the novels "Case Histories," "One Good Turn" and "When Will There be Good News"? by Kate Atkinson. Former soldier and police officer Jackson Brodie (Golden Globe nominee Jason Isaacs, "Harry Potter") is a private investigator compelled to bring peace to victims and their families while escaping the memories of his own traumatic past. With a trio of compelling "cold case" mysteries at its core; with its wonderfully sympathetic and complex private detective hero; with its host of instantly endearing, lovably flawed characters; and with its effortlessly beautiful and intelligent prose, Case Histories is Kate Atkinson's breakout book - the most accomplished, most compulsively readable novel yet from a writer of the first rank. The first book in Kate Atkinson's Jackson Brodie Shelve Case Histories. Currently Reading. Currently Reading. by Kate Atkinson. Ratings Reviews published 77 editions. It is summer, it is the Edinburgh Festival. Shelve One Good Turn. Currently Reading. Currently Reading. When Will There Be Good News?Series Works: One Good Turn, Started Early, Took My Dog, Big Sky, When Will There Be Good News?, Case Histories. Case Histories is a British crime drama television series based on the Jackson Brodie novel series by Kate stars Jason Isaacs, who had also narrated the abridged audiobook adaptation, as protagonist Jackson Brodie. The series is both set and filmed in Edinburgh. Initially each episode was aired in two 60 minute sections. The first series premiered on 5 June , on BBC1 in the No. of episodes: 9 (list of episodes).